On friday, 8th of december, an annual special dinner was held in prison, for persons serving lifetime sentences (“lifes”).
7 women (including Martha) who serve lifetime sentences in Dochas Centre were allowed to invite their close ones.
Every woman could invite up to 3 people. In total, there was about 20 people at the dinner.

Martha also could invite 3 people.
By decision of Martha and her family it was agreed that those people will be: two friends of Martha from Ireland, and Martha’s sister – Monika, who will arrive from Poland specially for the occasion.
The family wanted Martha’s mother to come, but it was eventually agreed, that Monika would arrive.
The two friends were Krysia and Rafał. Both support Martha and her family a lot (thank you) and they weren’t on such dinner last year.

A short relation from the sister. 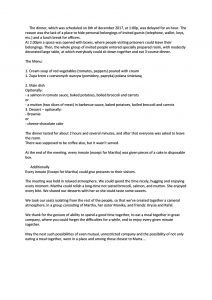