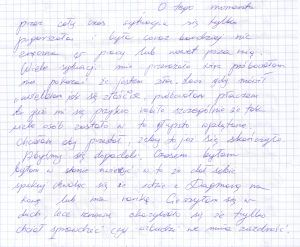 Since that moment the situation got only worse and it was more and more awkward, both at and outside of work. Many situations frightened me, so I tried to show him that I am angry. But when he was saying “I love when you’re angry” I tried crying, because I was getting sad and sorry, especially that so many people have been involved in this nonsense. I wanted him to stop, to end it. So we could get along. Sometimes I was even able to believe that he gave up, when he was  saying that he’s going on a date or coffee with Dagmara. I was happy inside, but again it turned out that he only wanted to check if I’m going to be jealous.