Polish woman convicted for lifetime imprisonment, raises money for the attorney by painting 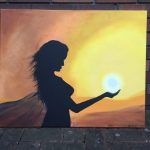 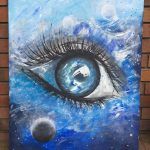 Two contentious paintings done by Martha, were displayed last week on the wall at Dochas Centre prison in Dublin.

Why contentious?
We were writing about them a lot, (to some people too much), among others on February 3, 2018:
“Martha didn’t give those paintings “for storing” until she will get out of prison. Those paintings left the prison legally and their indisputable owner is Martha’s sister. Those paintings are not the property of the prison.”

This doesn’t stop prison authorities to demonstratively hang them on the wall instead of returning them to the rightful owner.
They are displayed on the wall in the room near the metal detector gate.
It’s the first control room in Dochas Centre.
Near the gate that one walks through, there’s a conveyor with a monitor and a small chamber for X-raying small things: shoes, belts, coats etc.

Is displaying the paintings an expression of appreciation of Martha’s talent?
We agree that Martha, with her personality and talent, definitely stands out in the Dochas Centre.

Or maybe hanging those paintings is a clear demonstration of ignorance of the Dochas Centre prison?
It’s nothing, that a rightful owner – Martha’s sister, requests their return.
GARDA in Ireland can do what it wants.

We don’t know what motives guided the authorities of Dochas Centre prison.
But thanks to that, the paintings can be viewed.
They are in the room that anyone can enter.
So we invite You to see Martha’s creations personally.
You don’t need to visit anyone in Dochas Centre to see the paintings.
All you have to do is to enter between 10-12 a.m. or 2-4 p.m. (exceptTuesday).
You must press the button at the door in front of Mountjoy Prison (near the small  roundabout).
After entering, just tell the person at the duty office, that you wanted to see Martha’s paintings andturn left left.
The paintings are displayed in the room near the gates.

The paintings can be viewed, and the counter of ignorance is ticking…
By today it’s 202 days.
For 202 days now, the paintings made by Martha, are unlawfully held by prison authorities of Dochas Centre in Ireland.

According to our earlier announcements we have put the counters to our site.

Main counter is how many days, and hours, Martha is held in a place she shouldn’t be.
Every day is additional injustice.
Every hour is additional nuisance.
On July 28, 2016, a difficult time started for Martha.
When will it end, and what will be it’s final?

The second counter concerns unlawful holding of paintings by Dochas Centre prison authorities.
The paintings, whose owner became Martha’s sister, are still unlawfully held in prison, against the owner’s will.
The holding began on January 18, 2018.

When the situation changes, the counters will stop.

TIME – an enemy or a friend?

Martha had donated two of her paintings for the Great Orchestra of Cristmas Charity. 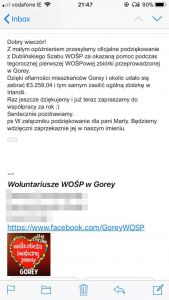 Good Evening!
With a slight delay we send our official thanks from the Dublin Staff of GOCC, for your help during this year’s first fundraising of GOCC held in Gorey.
Thanks to the generocity of citizens of Gorey and the surrounding neighbourhood, we managed to raise €3 258,04  and by this add to the general raise in Ireland.
We thank you once more, and right now we invite you to cooperate with us in the next year.
P.S. As an attachment, we send thanks to Ms Martha. We would be grateful for forwarding it to her. 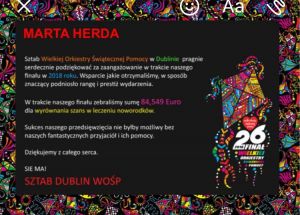 Marta Herda
The Staff of Great Orchestra of Christmas Charity in Dublin wishes to thank you from the heart for your involvement during our finale in 2018. The support we have received, significantly raised the rank and the prestige of the event.
During our finale we’ve gathered €84 549 for equalizing the chances in treatment of newborns.
The success of our project wouldn’t be possible without our fantastic friends and their help.
From deep of our hearts we thank you.
Hey!
The Staff of GOCC Dublin

The family has already told Martha, that they received thanks for her support.

O thursday, january 18th, unexpected thing happened. Martha called one of her friends, Mariusz, and asked him to bring back the paintings she gave her sister. Martha knew that the paintings were still in Ireland. Her sister didn’t take them for now, because they didn’t fit into the airplane luggage. Mariusz didn’t know, that this situation wasn’t discussed with Martha’s sister, and fulfilled Martha’s request.

What was this all about?
Next visit of Martha’s closest family is coming soon. This time, for the first time, her niece is going to visit her too. Martha is living with this visit. She would very much want to give some presents to her closest. That’s why she attends the school and lessons, to make something for others. All the time prison authorities don’t allow Martha, the only one of the prisoners, to give anything to anybody.

In the conversation with Mrs Governor Martha asked, that she finally be able to give some small items to her closest. Mrs Governor said, that she will not allow it because the family sells those things.When Martha denied that, Mrs Governor asked for a proof. So Martha got an “ingenious” idea, and first thing in the morning she called Mariusz, who was supposed to visit her that day, to bring the paintings.

This situation taught Martha and her family a lot.
The family asked Martha to not to prepare any gifts for their visit.
The most important thing is that 4 women close to each other will meet together.
Martha’s family is fighting for Martha’s freedom not trifles.

Martha needs help and support herself, but she is also helping others, 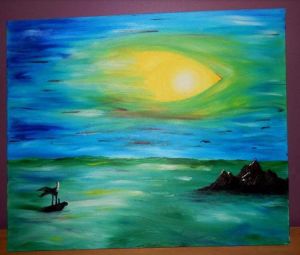 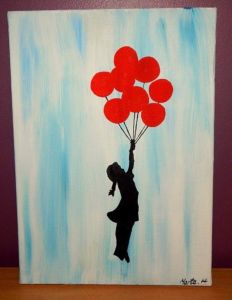 It’s the first time when GOCC was organized in Gorey, Ireland. 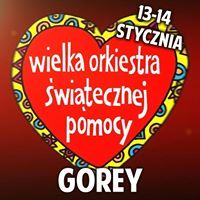