July 28, 2016, in Ireland a disgraceful verdict was issued.
11 people of the jury, people not knowing about the law, made a decision.
Without evidence, without proving the motive, without proving of planning, after a month of circumstantial trial, after a week of thinking over a decision…
Suddenly…
…on the last day before summer holiday…
they make a decision, that (“beyond any doubt” – that’s how it’s suppose to be) – Martha is GUILTY OF PREMEDITATED MURDER?!
Martha, who attended the trial out of her recognizance, suddenly goes to prison.
The sentence is the worst: LIFETIME IMPRISONMENT.

With a 11:1 vote.
Almost unanimously, like there was no trial, like there was no doubts.
A sentence with accordance to four years of media campaign in Irish media, who made such  verdict on Martha earlier.
Now “blessed” by 11 “righteous”.
(As for thinking, Hungarian media showed a higher level of logical thinking than Irish media – on the beginning they reported, that Martha jumped out from the car, before it falling into the water.
It was unthinkable for them, that Martha, wanting to kill, drove the same car to the water along with the passenger.)

Things that are ILLOGICAL and ABSURD for whole world, are they acceptable in Ireland?
Will the world believe in such thinking and actions of Martha?
Do people who accused Martha believed this themselves?
With such level of “insight” can they be any authority?
Or maybe they are an authority: because they are effetive.
With such absurd accusation – a victory in the Court.
One must know how to do it. Under the other circumstance we would say – “we admire”.
It doesn’t matter that thinking world is laughing.
People accusing Martha may think:
“They have right – and we have the MONEY”.

Or maybe the whole trial is JUST A COVER?
Illusion of Trial, Illusion of Justice in Ireland?

Today the young woman is in prison for two years.
With the sentence completely cancelling her life: LIFETIME IMPRISONMENT.

There are things that did work on July 28, 2016:
Promotions…
and connected to them…
…omnipotent EURO.

SHAME ON YOU IRELAND!
THINK IRELAND!
WE REMEMBER!
And the girl is suffering… 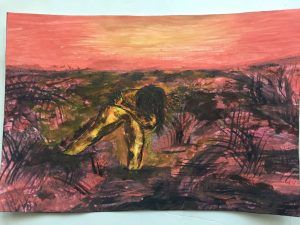 Martha’s mum asked, that Martha, if she has a hard time, would express her emotions through painting.
On fifth anniversary of Csaba’s death, when it was especially hard for her, Martha painted a picture. The family, which received it, understood Martha’s state.
A silhouette of a woman bent down. Face pointing down. Hair covering everything. Hands covering face from surrounding sharp bushes. The hands protect the face tilted towards the ground, and at the same time allow it to tear through the brushwood. The silhouette is in motion, even running. And everywher around – dry, sharp, scratching bushes.
Everything dominated by two colors – black and red turning into orange.
The state of Martha of March 26, 2018.

On the opposite side Martha painted a silhouette of a girl with balloons with meaningful writing: “As far away from here as possible”
Besides a letter to the sister. “I do everything to not lose my mind”
And Martha’s countdown… precise… days, hours, minutes… to her sister’s arrival…

We didn’t discuss publication of the painting with Martha.
Martha writes that after reading, throw away “this ugly picture, so it won’t scare You”.
The sister didn’t throw it away, she was not scared.
The picture has something in it.
Before everything it expresses Martha: her  feelings, her state… truth…

It was a good idea, to advise Martha to express her emotion through painting…